In this blog, I’m going to walk through how to set up AWS Copilot in GitHub actions.

AWS Copilot is an open-source command-line interface that makes it easy for developers to build, release, and operate production-ready containerized applications on AWS App Runner, Amazon ECS, and AWS Fargate.

Using copilot, you can initialize the entire infrastructure to run your containerized apps. Let’s take a look at an example. In this repository, we’ve demo nginx container that serves the index.html file. You can check out this repo here.

Copilot has a pipeline command to set up the Automated release pipeline using AWS CodePipeline for your application. You can learn more about it here.

This article is going to focus on how to deploy the application using Copilot using GitHub Actions. Let’s walk through the setup step by step and then I wrote a GitHub action to set up for you with easy configuration.

The AWS copilot CLI has to be downloaded and installed to access. The AWS Copilot binaries are released on GitHub. We can download the platform-specific binaries for a specific version or the latest version from the GitHub releases pages here.

You can use the copilot after installing the tool in your PATH.

You can use the deploy command using copilot cli

The above example is in the demo repository here.

When the changes are pushed into GitHub, the action builds the docker image and push the image repository into ECR. Then the pushed docker image is deployed into the configured environment for this ECS or AppRunner application. 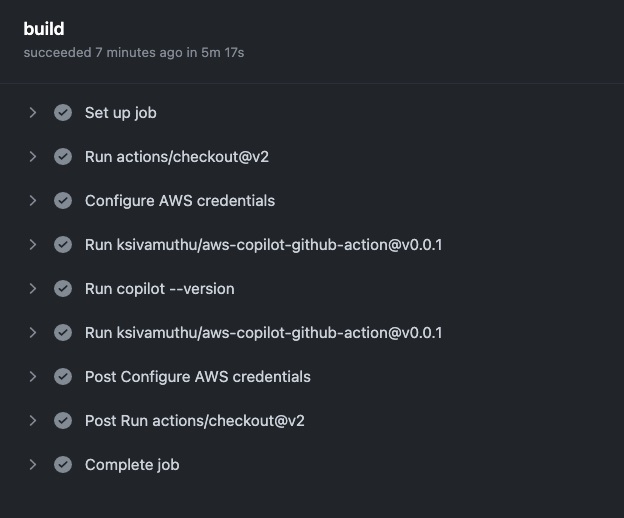 Once the workflow is successful, you can see the latest version of the application deployed.

🚀 AWS Copilot supercharges your application - one cli tool to set up infrastructure, build your application with many services, set up the pipeline to automate release, monitor the status of stack and application, and with add-ons. In this blog, we took a look at how to integrate the Copilot app using GitHub Actions.

I'm Siva - working as Sr. Software Architect at Computer Enterprises Inc from Orlando. I'm an AWS Community builder, and Auth0 Ambassador and I am going to write a lot about Cloud, Containers, IoT, and Devops. If you are interested in any of that, make sure to follow me if you haven’t already. Please follow me @ksivamuthu Twitter or check out my blogs at blog.sivamuthukumar.com!